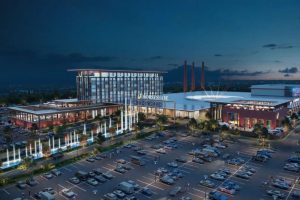 The Virginia City of Danville may get a Caesars Entertainment Corp. casino as city leaders are holding talks on the matter with the Las Vegas casino powerhouse.

Danville was one of five cash-strapped cities that were allowed to host casinos under legislation recently approved by state lawmakers.

RELATED: Bristol to Hear Public on Hard Rock Casino on May 21

However, these cities will only be able to host Las Vegas-style gambling venues if their residents approve their development in citywide referendums.

Caesars plans to invest $400 million into the development of a hotel and casino resort at the site of the former Dan River Mills industrial complex in Schoolfield. The complex will feature a casino floor with 2,000 slot machines, 75 table games, 16 poker tables and a sportsbook, multiple food and beverage facilities, a 500-room hotel, a 35,000-square-foot convention center, and a 2,500-seat live entertainment venue.

Caesars Vice President and Assistant General Manager Jacqueline Grace said Monday that they are particularly excited about the convention center and the live entertainment venue and “what those amenities will mean for the city of Danville.”

According to early projections, Danville will annually receive about $30 million in gaming taxes and supplemental payments from the casino resort and $20 million in upfront payments for land acquisition and public investments.

Additionally, the city will get about $4 million in direct additional annual taxes from real estate, hotel taxes, meals, and sales.

The resort is expected to generate 900 jobs during construction stage and 1,300 jobs once fully operational.

Caesars’ plan needs to go a long way before being materialized. The casino company is still in the process of negotiating the whole process.

The City Council has not said officially whether it wants a Caesars casino or not. Danville Mayor Alonzo Jones commented on Monday that leaders have three focus areas – “reduce crime, improve education, and increase economic development.” He went on:

“If approved by voters, I say it again, if approved by voters in the November election, this project is anticipated to generate $35 million in new annual revenue which will allow the city an opportunity to significantly improve each of these areas for years to come.”

While the future of Caesars’ casino proposal lies with voters, the Danville City Council needs to allow a citywide referendum. Residents could go to the polls as early as this coming November.

Caesars has not said when its property, if approved, will open doors, but it is believed that this will happen at some point in 2023.

Bristol, one of the other cities that were allowed to host a casino, is partnering up with Hard Rock International. The Florida-based gaming and hospitality company wants to build a hotel and casino resort at the vacant 46-acre Bristol Industrial Mall that will feature a 750-room hotel, a casino with slots and table games, an indoor/outdoor Hard Rock Live entertainment center, retail space, and multiple dining outlets and bars.